The City of Eugene is working to build a high-speed, publicly owned fiber network in the downtown area called EUGNet.

Stretching over 1,200 miles, EUGNet will be the largest publicly owned, open access fiber network in the country.

The project aims to improve Downtown Eugene’s technology infrastructure, making it one of the most well connected cities in the country. 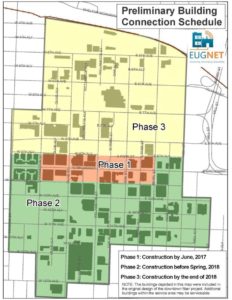 The City of Eugene, Lane Council of Governments (LCOG), and Eugene Water & Electric Board (EWEB) partnered with Technology Association of Oregon to begin the project in 2015.  Initially, fiber was brought to three buildings: 44 Broadway – The Broadway Commerce Center, 940 Willamette – The Woolworth, and 942 Olive St – RAIN Eugene.

The success of the pilot project led to the Eugene City Council to vote for the expansion and funding of the project to a wider area in the downtown core, ensuring that downtown businesses have access to world class high-speed internet.

Located in the Miner Building in downtown Eugene, XS Media (now Hunter Communications) is the premier fiber internet service provider for the community.

From the first moments of the fiber project, the company has coordinated with city officials and other organizations to make this project a success.

XS Media (now Hunter Communications) met with businesses and community members to identify their connectivity needs.  The company offers speeds up to 1 Gbps (1,000 Mbps) and launched a 10 Gbps service in March 2017.  The connection is among the fastest in the nation and a quarter of the price than service in other cities.

XS Media’s (now Hunter Communications) backbone is served by two paths.  One heads to the north in Portland and the other is south to the Bay Area.  This backbone diversity provides businesses with unparalleled access.

XS Media (now Hunter Communications) has been serving Lane County since 2001.  The company has continued to evolve their technology as new products and services are released. 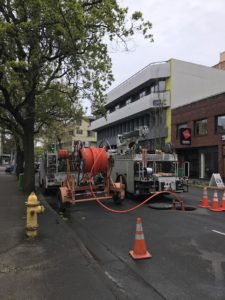 August 2017 – Phase 2 construction begins downtown with connections to the Downtown Athletic Club, Citizen’s building, and others.

June 2017 – Phase 1 construction downtown begins with connections to IDX, Pipeworks, and 6 other buildings.

February 2017 – The EWEB board approved the inter-governmental agreement to expand construction of EUGNet, to the downtown.

January 2017 – The Register Guard publishes an article on the Downtown Fiber Project.

December 2016 – The City of Eugene approves open-access fiber pipeline to San Jose and Portland to improve capacity to Eugene for downtown project. Scheduled completion is March 2017.